A big welcome to all our new readers and businesses in the Kilburn, Belper and Ripley areas of Derbyshire.

They're instantly readable online so if you miss your copy or live outside our circulation areas, then please feel free to catch up with all the community news via our website.

Karyn Milner - Editor.
Posted by All Things Local at 13:57 No comments:

Just a brief line to let you all know that the brand new All Things Local website is now live.

We'll be back in a few days to tell you more about some of the exciting developments that have taken place but in the meantime, please click here to visit our completely new website and tell us what you think.

Cheers!
Posted by All Things Local at 21:20 No comments:

The view from the projection box with RItz Cinema (Belper) projectionist Paul WInfield.

The weather pundits are predicting a heat wave summer but as I sit here looking through the window at a slate grey sky and pouring rain it seems a long way off! I'm sure it will arrive and with it comes this year's crop of summer blockbuster films. More about those later, but first...

As a special treat this summer why not book The Ritz for a Sunday afternoon soiree? Every Sunday in July and August we are offering you the chance to watch a film of your choice. For just £150 you will get all the luxury seats and sofas (that's 26 seats in total).

Maybe you have a birthday surprise planned or a retirement party; a corporate treat for valued employees or perhaps you've always dreamed of seeing your favourite film on the big screen dedicated just to you!

Booking requests for July must be received by Monday 8th June and for August by Monday 6th July - please email your chosen date and film to info@ritz-belper.co.uk. This is a limited offer for summer only so be sure not to miss out!

Now let's have a look at the big films coming your way...

Terminator Salvation - after much of humanity has been wiped out by the nuclear holocaust, the survivors led by John Connor struggle to stop Skynet finishing the job, but it will be strange without Arnie!

One I'm looking forward to is Ice Age: Dawn of the DInosaurs - I've seen bits of it and it's really funny, a film for everyone in he family.

At last, after months of delay, Harry Potter and the Half Blood Prince will be with us this summer and the war against Voldermort is not going well.

Finally looking into the Autumn and I can't wait - a new film at last from Quentin Tarantino - Inglorious Basterds. I can't tell you much about it but Brad Pitt stars in a story of a hit squad of Jewish American soldiers operating in occupied Europe at he end of the 2nd World War.

Such a lot to look forward to.
Posted by All Things Local at 21:08 No comments:

Just a short note to let you know that the new editions of All Things Local - the community magazines for Kilburn and Belper are now online and available to read.

You can also catch up with all the latest features and regular columns - from recipes and wine reviews by local residents to the latest community police news and a delightful hill walk around Alport Heights, Derbyshire.

We've just launched a brand new edition especially for the Ripley area including Waingroves, Codnor and Marehay. Issue 1 is distributed to 9,000 homes and now available to read online.

So - lots happening at All Things Local. We'll be back with more news and articles from our community magazines very soon.

The view from the projection box with RItz Cinema projectionist Paul Winfield.

How good is that? Despite all the crunch, recession, downturn or whatever they call it, the British film industry goes from strength to strength with our films collecting arms full of awards at the Golden Globes, BAFTAs and the Oscars. Remember though that it's not just the stars and directors who deserve our applause, hundreds of back room people make British film great and we lead the world in special effects and technology.

Of course Hollywood and the rest of the world are waiting for the really big awards of 2009 - "The Ritzys" - when our very own red carpet will be rolled out again on 6th June to celebrate another great year in the industry.

Now the big films coming up....

A new Clint Eastwood film is always an event, whether or not he's in front of the camera or behind the camera. In this case it's both - Gran Torino sees Clint as Walt Kowalski, a Korean war veteran who sets out to reform his teenage neighbour who tried to steal his prized 1972 Gran Torino car, nice to see Clint with a rifle in his hands again.

Old Big 'Ed is back! The Damned United looks at Brian Clough's 44 day reign as manager of Leeds United - I remember it well, there was nothing else on the back pages of the press for weeks so this will be a big one for us.... book early! A strong British cast include MIchael Sheen aka Tony Blair and David Frost.

State of Play is a big screen version of the BBC mini-series of the same name. A team of investigating reporters and a police detective try to solve he murder of a US congressman's mistress; Russell Crowe stars.

There's so many good films around this year - come to The Ritz and see them all. Next issue of All Things Local, I'll look forward to the summer blockbuster season.
Posted by All Things Local at 12:44 1 comment:

Issue 4 (Belper edition) of All Things Local is now online 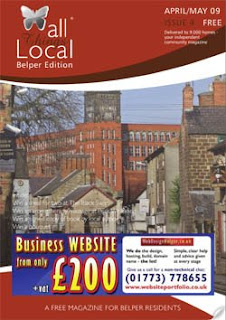 Hot on the heels of publishing Issue 12 (Village Edition of All Things Local) online, we're very pleased to inform you that the accompanying separate Belper Edition (Issue 4) is now also online for viewing. 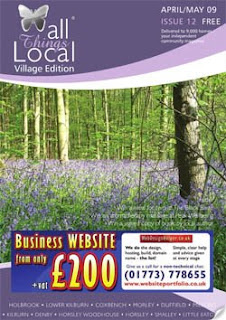 Issue 12 (April/May 2009) - Village Edition - of All Things Local - the popular community magazine covering the Kilburn and surrounding village areas has just been added to the All Things Local website for reading and viewing online.

Visit All Things Local website now and click on the current village edition to get all the latest news and regular features 9,000 local readers enjoy.
Posted by All Things Local at 18:10 No comments:

Opportunity for public to abseil down Derby Cathedral Tower

Duffield Based Derby Mountain Rescue Team is currently promoting a sponsored abseil down Derby Cathedral's Tower on the 26th or 27th September 2009.

A Limited opportunity has arisen for members of the public to abseil down Derby Cathedral’s Tower. At 65 metres (212 feet), it is the second highest church tower in the country. Derby Mountain Rescue Team members will be in attendance at the top and base of the Tower, throughout the weekend.

For more information, click here.
Posted by All Things Local at 13:17 No comments:

View from the projection box - issue 11

With all the doom and gloom on the TV and the newspapers full of credit crunch mania, what better than to put on your coat and come to The Ritz and escape into the wonderful world of cinema? That's better - a wine and a nice piece of cake and some great films are coming to chase the blues away.

Already tipped for awards, the lovely Kate Winslet stars in The Reader a dark tale set in post war Germany when a young man's obsession with an older women runs headlong into a war crimes trial, where he learns an awful truth. Staying with WWll, Tom Cruise heads a strong cast in Valkyrie a thriller based on actual events.

Mid-February sees half-term and Inkheart which we think will be popular with our younger customers. Looking further ahead and one of my favourites Kate Blanchett stars with Brad Pitt in The Curious Case of Benjamin Button the story of a man who starts aging backwards (I wish!) with bizarre consequences.

Set during the mid 1950's in a Connecticut suburb Revolutionary Road centres on a young couple coming to terms with personal problems and trying to raise their two young children.

Also coming soon is a new Woody Allen film Vicky Christina Barcelona and Young Victoria, a dramatisation of the turbulent first ears of Queen Victoria's reign and her romance with Prince Albert.

So once again, we hope there's something for everyone and we look forward to seeing you at The Ritz.

View from the Projection Box with The Ritz Cinema, Belper, projectionist Paul Winfield.
Posted by All Things Local at 20:13 No comments:

Just a very brief note to let you all know that Issues 11 (Village Edition) and Issue 3 (Belper Edition) of the community magazine - All Things Local - are now available to read and view online.

As well as a round-up of the regular columns, you can also read each edition including back issues in full at our website - http://www.allthingslocal.co.uk

We'll be back later with more snippets and cuttings from this popular community magazine for the Kilburn and Belper areas in Derbyshire.
Posted by All Things Local at 21:53 No comments:

About All Things Local

All Things Local
Kilburn, Belper, Derbyshire, United Kingdom
I formed All Things Local back in June 2007 as I wanted to do something positive for local communities in and around the area in which I live. Having spent the last 18 years in advertising I feel passionate about All Things Local and about its value to both readers and advertisers alike. The purpose of All Things Local is to serve the communities into which it is distributed and to support the local businesses that operate within or close to these communities. Studies show that people like to “buy locally” whenever they can and now the readers of All Things Local have a free reference guide to enable them to do just that.